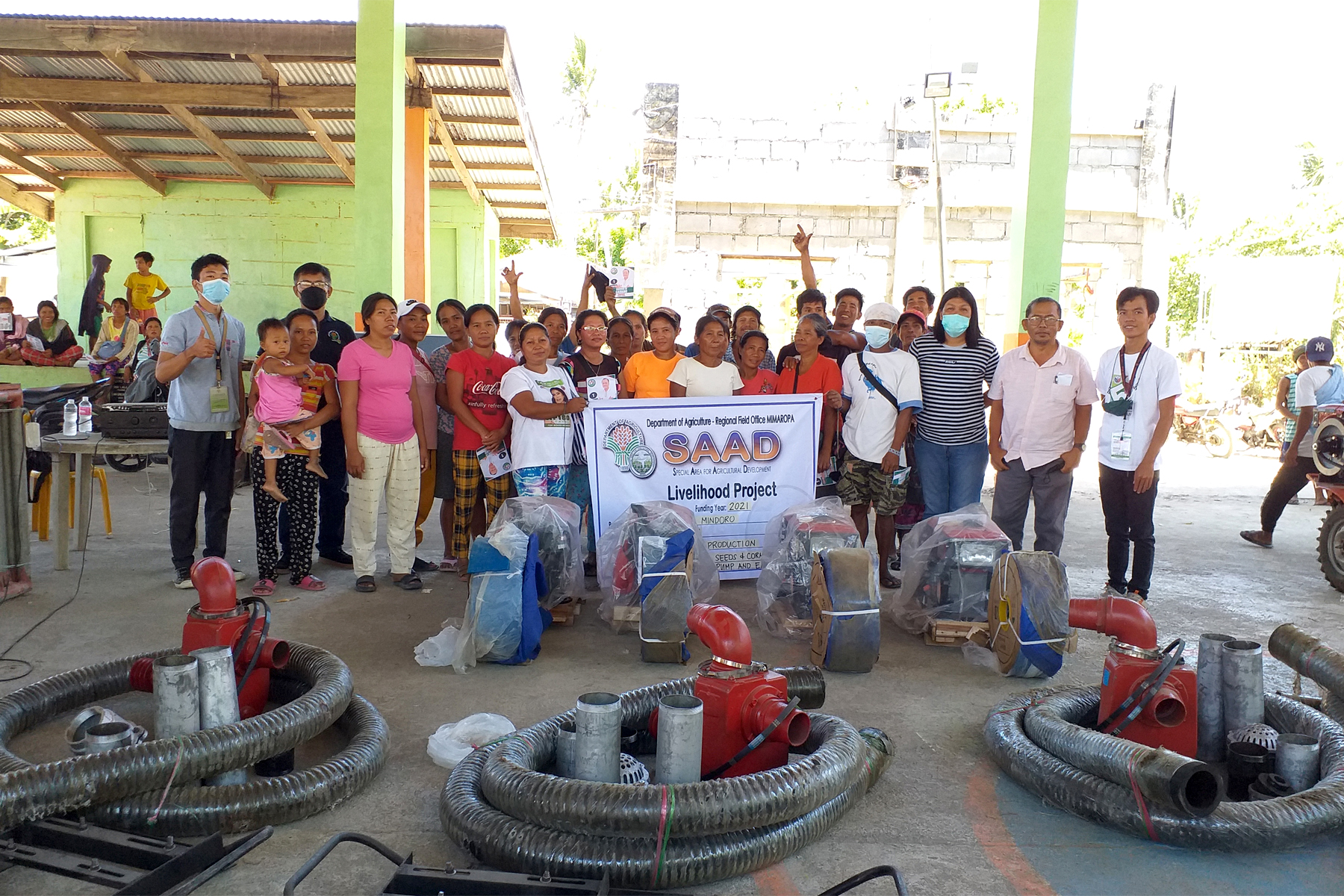 OCCIDENTAL MINDORO, May 13, 2022 - The Department of Agriculture - Special Area for Agricultural Development (DA-SAAD) awarded Php 1,265,200.00 worth of rice and corn production inputs to four IP Hanunuo-Mangyan associations residing in Brgy. Paclolo, Magsaysay - an End Local Communist Armed Conflict (ELCAC) area - to help the farmers prepare for the upcoming planting season in May and to boost their production.

In addition, each association received 50 sacks of certified rice seeds (RC18) and 25 bags of OPV white corn seeds as preparation for the planting season during the onset of wet season in May, as farmers are reliant on rain for their irrigation.

While the farmers of Basa Farmers Association (BFA) also produce traditional rice, the group is more inclined in corn production. They received one unit of water pump with complete accessories and rice and corn seeds.

During the turnover, Mr. Eddie D. Buen, SAAD Provincial Coordinator explained to the beneficiaries about the program’s goal in reaching out to marginalized farmers.

(SAAD aims to reach out to those farmers who are in far-flung areas. The program is doing its best to give interventions to farmers who have not been reached by other programs of the Department of Agriculture, and you can expect that those who were not able to attend today will receive help as well through the program.)

According to Hon. Laila M. Agnes, Barangay Captain of Paclolo, The projects complement the farmers' needs as they are provided farm equipment to help them utilize their land even during the dry season.

(The project  is ideal for the IPs so they can farm on their idle lands. They will be able to plant even in the dry season with their water pump and they are provided with seeds which are ideal for their land in the mountains.)

Mr. Primo Estonactoc, Agriculturist II and ELCAC Focal Person from the Office of the Provincial Agriculturist (OPA) shared that tapping DA-SAAD program is part of the provincial government's support in ELCAC's Whole-of-Nation approach where various local and national agencies work together to end armed conflicts peacefully through sharing their resources, knowledge, and programs.

The beneficiaries who are registered in Registry System for Basic Sector in Agriculture (RSBSA) will be given fertilizers from DA Rice Competitiveness Enhancement Fund (RCEF) through the Municipal Agriculture Office (MAO) of Magsaysay as a supplemental intervention.

Brgy. Paclolo is one of 19 identified ELCAC areas in Occidental Mindoro and was chosen to be one of the additional SAAD beneficiaries in 2021 with the recommendation from the Provincial Governor's Office (PGO).